Once upon a time, I was setting up a new Windows 10 computer running Service Pack 1903. One of the many Defensive Computing tweaks I make to a new PC, is to disable a rarely used OS feature, the Windows Scripting Host (aka WSH), which has been abused by malicious email attachments. There are a handful of file types that Windows will process with WSH and disabling this defends the computer from some attacks. I blogged about this back in October 2016: Tweaking WSH helps defend Windows PCs from malicious email attachments.

All I wanted to do was change some types of files to open with Notepad rather than be treated as scripts by the Windows Scripting Host engine. So, I go to the classic Control Panel, click on Default Programs, then on "Set your default programs". This took me to the Default apps section of the Windows 10 Settings. Yet again, you have to tell Microsoft what you want to do (once is not enough) by clicking on "Chose default apps by file type".

As show below, I was finally in the right place. Now for the real pain. 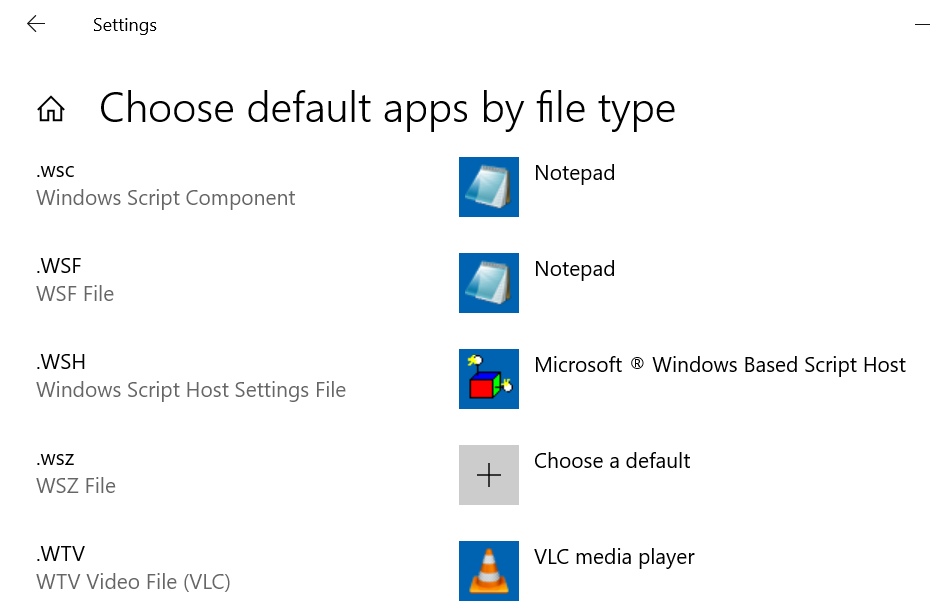 Scrolling down to .js files shows that they still default to be processed by "Microsoft Windows Based Script Host". But, you can no longer configure Windows 10 to open them with Notepad. The only alternative to WSH is a Microsoft Store app. This is part of Microsoft's forced migration to their new Tile World apps. Never mind that, by and large, Windows users (aka Microsoft customers) hate Tile World apps.

When you click to search the Microsoft Store for apps to process .js files, Windows does the search for you. I find a Notepad clone app that should be harmless. But, when I click on the big GET button nothing happens. <expletive deleted> Microsoft.

I have no experience with Tile World (Microsoft Store) apps but I try to figure out why the app won't install. Turns out it wants Windows 10 19541.0. What the heck is that? It says that my system is only 18362.720. These numbers mean nothing to me. Is this Klingon math? <expletive deleted> Microsoft.

Moving on, I try to install another Notepad clone, this one called NotepadX. It installs. Back again to Settings, to chose a default app by file type. Now, I have bullets in my gun. Or, so I thought.

Scrolling down .js files, I tell Windows, again, to look for an app in the Microsoft Store. It does. It finds NotepadX. It lets me Launch NotepadX. I don't want to launch it. But that's all I can do. There is no button or option (at least none that i could find) to set NotepadX as the app to process .js files. I feel like Charlie Brown after Lucy has withdrawn the football. <expletive deleted> Microsoft.

I try again. I get out of Settings and go back into it. This time, I try .jse files. When Windows searches the Microsoft Store, it finds no apps. So, I search for NotepadX which it finds. But again, there is no way to make NotepadX the default app for processing .jse files.

For Windows users, Microsoft is the enemy. Perhaps this is why the world is not making any new Windows users.

In the end, I created a test file that ended with .js, right clicked on the file in Windows Explorer and did "Open with" to force Windows to open the files with Notepad. Then, I renamed the test file and repeated the "Open with" trick for files ending in .jse, .vb, .vbe, .vbs, .wsc and .wsf. Not sure that this covers all the bases, I then scrolled though the long list of file types to verify that nothing else would be processed by WSH (Microsoft Windows Based Script Host).

It's a HUGE list. Can it be sorted by the default app rather than by file type? Of course not. <expletive deleted> Microsoft.

While checking, I run across some other file types that looked like they might be WSH related but had no default app (.vbproj, .vbx and .wsz). For good luck, I changed them to open with Notepad too.

Then, there were .wsh files. For whatever reason, there is no "Open with" option when you right click on a .wsh file. I verified this on another Windows 10 machine, running a different service pack. Round 8 of the fight goes to Microsoft. But, <expletive deleted> them.

Not at all. The association of a Default App is user specific. This computer, like all that I configure, has two Windows users. One is a restricted user (used 99% of the time for safety), the other is an Administrator. To defend the machine, the whole process needs to be repeated while logged on as the other userid. Ugh.