Two things about Eero routers having nothing to do with Amazon

UPDATE Feb 26, 2019. It seems I was wrong about being wrong. Ugh. I have continued to watch eero over a few more days. It does indeed stick to using a wide channel on the 2.4GHz band. So while the software I used initially may well be buggy on reporting channel widths, I have since used multiple other programs on multiple OSs. The one time it used a narrow channel seems to have been a fluke. For more about this, see the eero page on my RouterSecurity.org site which also has more on the new device notification feature.

UPDATE Feb 25, 2019. It seems the software I was using to report on channel widths, is buggy. To be sure about things, I got hold of an Eero router to test in my home. That let me run more tests and three different Android apps reported the Eero using normal channel widths on the 2.4GHz band. To see if the problem was Windows vs. Android, I tried another Windows based Wi-Fi analyzer (Netspot) and it too reported normal channel widths. Only WifiInfoview said Eero was using wide channels. Everything points to there being a bug in WifiInfoView. I reported it to the developer. It seems that Eero starts out with 40MHz wide channels and then re-adjusts to 20MHz narrow channels. More details on the new device notification will be added here soon.

Now that Eero is having its 15 minutes of fame, thanks to their being assimilated into the Amazon collective, I am writing up these two recent Eero observations. One is good, one is bad. There is no Eero in my home, but I did setup and continue to administer an Eero system for someone I know.

My first observation is not based on the Eero system that I work with. Instead it comes from the excellent windows-based Wi-Fi monitoring program, WifiInfoView by Nir Sofer. I blogged about the program back in 2017: WifiInfoView is a great Wi-Fi utility for Windows.

Wi-Fi networks, especially those with weak signals, come and go. One minute they are visible, the next they are not. Unlike other Wi-Fi monitoring programs, WifiInfoView does not drop networks from its display. That is, if the program is running for 20 minutes, it will report on every network it has seen in that time, even the networks that were only visible briefly.

Recently I started the program and left it running for a while. While looking for something else, I noticed that WifiInfoView had seen an Eero network. This was my first sighting of Eero in the wild. An excerpt of the WifiInfoView report is shown below.

An eero system in my neighborhood

Techies will notice an issue immediately - it is using 40MHz wide channels in the 2.4GHz band. Let me explain.

Wi-Fi uses two frequency bands, 2.4GHz and 5GHz. In the 2.4GHz band, in the US, there are 11 possible channels, each one is 20MHz wide. A router can either always use a particular channel that its owner configures or it can try to pick one on its own. Eero, being targeted at non-techie consumers, does not offer the ability to pick a channel.

Wider channels allow for transmitting more data so the Wi-Fi seems faster. The downside is that they are more likely to interfere with the neighbors and, in turn, be interfered with by the neighbors. This radio interference can make wide channels slower than narrower ones that have their small frequency to themselves. Faster Wi-Fi is available on the 5GHz band, so almost every router sticks to 20MHz wide channels on the 2.4GHz band.

Apple, which used to make routers, insisted on it, saying:

"Channel width controls how large of a 'pipe' 'is available to transfer data. However, larger channels are more subject to interference and more likely to interfere with other devices ... Use 20MHz channels in the 2.4GHz band. Using 40MHz channels in the 2.4GHz band can cause performance and reliability issues with your network, especially in the presence of other Wi-Fi networks and other 2.4GHz devices. A 40MHz channel might also cause interference and issues with other devices that use this band, such as Bluetooth devices, cordless phones, and neighboring Wi-Fi networks."

Simply put, Eero is not playing well with the other children in the sandbox. But, it is worse than that.

I live in a very crowded Wi-Fi neighborhood. After just a couple minutes, WifiInfoView will detect over 150 wireless networks. If there was anywhere on the planet that called for narrow, non-interfering, 20MHz wide channels, it is my neighborhood. Yet, there was a nearby Eero system using 40MHz.

Confident that this was a bug, I contacted Eero technical support. Long story short: tough luck. The router is supposed to be smart enough to decide when to use normal narrow channels and when to use wide channels. Clearly, it isn't that smart.

Neither Eero, nor Google's Wifi mesh system for that matter, let you change the channel or the channel width. Heck, their apps don't even report this information (FYI: Google Wifi uses the standard channel width on the 2.4GHz band). In contrast, the AmpliFi mesh router system from Ubiquiti lets you do both. As shown below, you can force the use of a specific channel (in case the router makes a poor choice) and you can adjust the width of the channels on each frequency band. 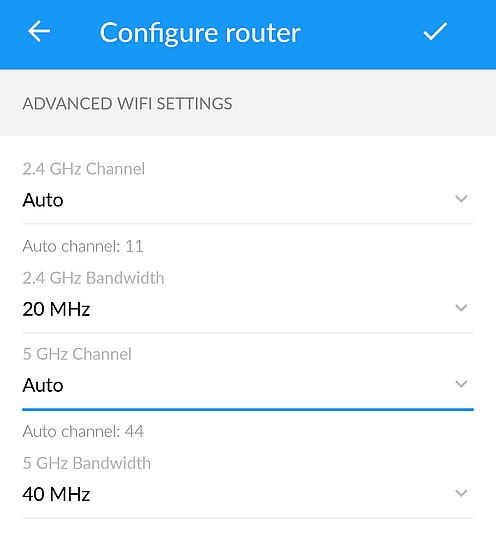 In fairness to Eero, I have seen some other routers also using 40MHz wide channels on the 2.4GHz band. One day, WifiInfoView reported 112 SSIDs (networks) on the 2.4GHz band and they were all using standard 20MHz wide channels except for one of the MySpectrumWiFi* networks. But Eero was supposed to be smart about this sort of thing, it is part of what justifies the relatively high price.

Update: Feb. 18, 2019: Some homework turned up a March 2016 review of Eero by Tim Higgins at SmallNetBuilder.com where the issue of channel width on the 2.4GHz band issue came up. Higgins tried to get Eero to switch from a wide channel (40 MHz) to the normal narrow channel (20 MHz) by putting another router using the same channel as Eero right next to the Eero. There are rules for how this sort of thing is supposed to work and this type of interference is, according to Higgins, not in the rules. With the Eero on channel 1, Higgins switched the nearby router to channel 4. That interference was detected by the Eero and it switched to a narrow channel width. But, rather than staying on channel 1, it also switched to channel 4. What a mess. No one should use channel 4, but that's another whole topic. My bottom line: I would not want my neighbors to have an Eero.

Update: Feb. 20, 2019: An August 2017 article by Tim Higgins, Wi-Fi System Roundup, noted that in addition to Eero, the TP-LINK Deco M5 and the Netgear Orbi also use wide channels on the 2.4GHZ frequency band. After reading this, I ran WifiInfoView and, sure enough, found a Netgear router using a wide channel 3, which I count as two mistakes. It was not an Orbi model as it was only doing Wi-Fi N, not the newer ac flavor.

Update: Feb 20, 2019. Back in May 2012, Tim Higgins of SmallNetBuilder.com wrote a couple articles about wide and narrow channels on the 2.4GHz frequency band. The rules are complicated, have changed and have not always been followed as part 2 of his article demonstrated. For a while, it was required that certified routers ship using narrow channels by default. There was (is?) a mechanism for Wi-Fi clients to tell the router that they do not support wide channels. Most importantly, routers using a wide channel are supposed to fall back to use a narrow channel when they detect interference. Defining that interference is complicated and Higgins found routers that did obey the rules. But, the interference rules are from the Wi-Fi Alliance, the industry group that certifies routers. And, Eero is not certified by the W-Fi Alliance. According to their tech support, this is because the Wi-Fi Alliance requires WPS and Eero decided not to support WPS. Good for Eero. And, good for their tech support, which answers questions directly and quickly. But, that means we don't know the interference rules they are using. Whatever they are, they don't seem to work well, since Eero uses wide channels in a very very crowded Wi-Fi neighborhood.

Update Feb. 27, 2019. This topic has been updated at moved to the eero page on my RouterSecurity.org site. In brief, the system is not flawed. Now that I have an eero router in my home I did careful tests and it works fine. Though, I am still confused as what a blue dot means in the app.

When I first created the checklist of security features on my RouterSecurity.org site, the ability to be notified of new devices joining your network was a pipe dream. Only one company had offered that feature and they disappeared after being purchased by Comcast.

In the last couple years, however, this is becoming more common and Eero is among the companies offering it (along with Gryphon, Luma, Amped Wireless ALLY, Fingbox and Bitdefender box). Kind of like two factor authentication, it is no longer sufficient to know the Wi-Fi password, now you also have to be approved by the nerd in charge.

There are two ways this might work, even ignoring the many types of notifications. One approach is not let new devices on the network until they are approved; the other is to let new devices in with just the password, but notify the network administrator about the new devices. The latter approach seems to be what Eero uses. I searched for documentation on this feature and found this, but it says nothing about whether new devices can be blocked by default.

As for the notification, I saw the notice as the word "Eero" on the horizontal stripe at the top of my Android device. I am glad to report that it was not necessary to go into the Eero app to be notified. On the down side, Eero does not seem to support email or text message notifications.

Finally, a warning that the system may be flawed. I was only notified about one device one time and in the time since, there seem to have been multiple new devices. They are indicated in the app with blue dots. Since the Eero is not in my home, I can't do a detailed test.